Kind of a letdown.   The existing board of BJ’s Restaurants (BJRI) placed one activist nominee on the board in April, which was expanded from 10 to 11, and recommended three more activist nominees for election at the June 3 annual meeting.   The company also agreed to buy back a disappointing $50MM of stock.   The company could easily and cheaply borrow up to 3x EBITDA for a $220MM buyback.  Not even an insulting letter…yawn.

More interesting, longtime BJRI shareholder T. Rowe Price hit the bid.   Luxor and PW Partners continued accumulating stock in March and April and T. Rowe appears to have used this as an opportunity to complete an exit from what was a 15% position a year ago.    Citadel and Baron also exited BJRI or at least dropped below 5%.

Luxor Capital, PW Partners, Zelman Capital et al collectively own 15.9% of the company.  They signed a standstill agreement (no solicitation etc.) as part of the agreement to place their nominees up for election to the board.   This is in effect until 10 days prior to the next deadline for submitting directors for nomination to the board in 2015.  Alas, insulting letters are prohibited.   So now the outsiders are insiders and we get to find out if Ellsworth Toohey, Howard Roark’s tormentor and a sometime Seeking Alpha commenter, is right to wonder if this is indeed a case of dog catches car.    With the stock now trading 19% below its post-activist pop of $35.18 and 5.6% below the activists’ average cost of $30.36, the dog is gaining on the bumper. 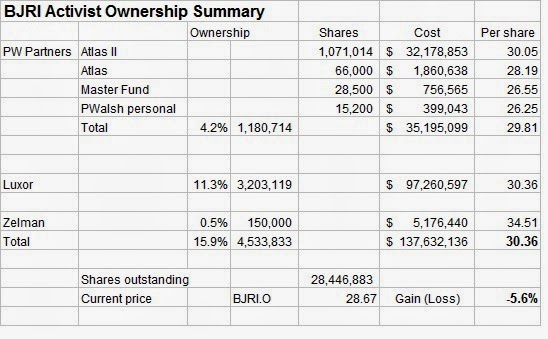 The pull back in the shares was likely a function of an end to short covering, an end to buying by the activist group, and a brutal correction in richly valued consumer discretionary stocks.   While the XLY Consumer Discretionary index is down just 4% since BJRI peaked on 3/18, high flyers are down a lot more including Chipotle Mexican Grill (CMG) which is down 16% since then.

On Thursday (5/1) we will find out if BJRI topped the 13% comp reported by CMG for the 1Q.   Since BJRI was running down 4.2% at 2/16, the question is not exactly fair.   I am guessing -3.3% given an industry wide pick up in traffic in March as weather issues abated.    My quarterly forecast is below: 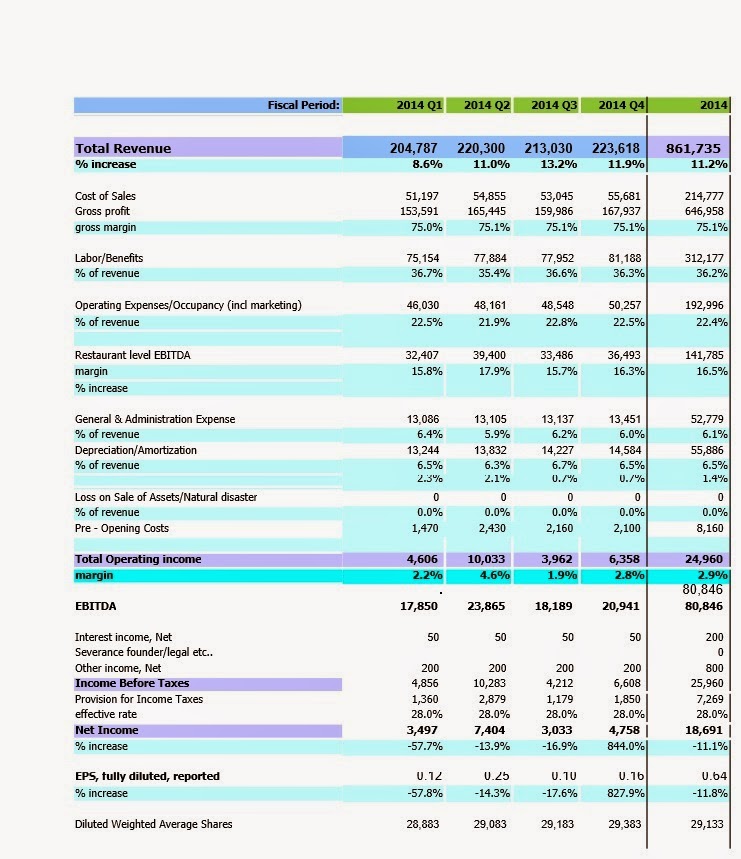 Part of BJ’s Restaurants (BJRI) earnings problem is easy to fix – marketing.   To counteract ebbing traffic, management has ramped marketing from 1.2% of revenue in 2011 to 2.2% in 2013 and up to 3.0% is expected in 2014.   A large chunk of the increased spending has been directed to television.   Here was one of the ads until it was also deleted from YouTube.

The company also ramped up spending on its loyalty program and tried an LTO with a third party, Big Poppa Smokers.    Perhaps because few people have heard of Big Poppa and even fewer believe that a chain restaurant at the mall can produce credible BBQ, the latter failed as has the overall marketing program.

The money spent on marketing, 2-3% of sales, may sound trivial, but it is huge in the context of the company’s 3.2% 2013 EBIT margin.   BJRI could almost double its net income by cutting a discretionary expense.   The $17MM spent on TV and other efforts resulted in 3% less traffic at the units.  Cutting that closer to zero would almost double net income.  This seems like a no-brainer.   Instead, management is doubling down.   It fired the old marketing chief and hired a new creative advertising agency.   Management said that it planned to spend $5.5MM on marketing in the first quarter alone with the great majority of that coming in March.   We will get a glimpse at the result of all that spending when the company reports after the close today.   Given that the company also distributed thousands of coupons for free Pizookies and $5 off coupons, it would seem almost impossible that traffic did not improve in March particularly since overall casual diner traffic improved from -1.7% in February to -0.2% in March according to MillerPulse.

“One for All” is probably better than “Wow, I love this place!” but the slogan probably is not the crux of the issue for BJ’s.   At an analyst meeting at the end of February the company described the brand/concept similar to my snarky epithet—CAKE with beer.   In other words, BJ’s is a place with a huge menu like the Cheesecake Factory with a huge number of beer options but lower prices.     The new creative team decided to embrace the huge menu as a defining element.   “One for All” is intended to emphasize that there is something for everyone at BJ’s.  Unfortunately, CAKE with beer may not be that compelling particularly now that lots of places offer impressive selections of craft beers on tap.


Craft might be part of the problem.   Craft, local, and artisanal is where consumers are headed.  Of course, in eighteen months those words will be as devoid of meaning as “gourmet”.    That trend is a big headwind for most chains and a tailwind for Chipotle Mexican Grill (CMG).    Management at BJs likes to portray the craft trend as part of the appeal of the concept.   It isn’t.     BJ’s is a large format chain restaurant that is typically located at a mall or just outside.   It has a long laminated menu devised in a corporate office.   The food is prepared by hourly, modestly skilled and probably disinterested labor.   BJ’s is the antithesis of craft.    And no BJ’s did not help start the craft beer trend as management sometimes claims.   The craft trend was started by home-brewers in the late Eighties then kick started in the Nineties by then micro-brewers like Sam Adams, Sierra Nevada, and Red Hook.    Coincident with the start of the craft brew trend, a number of restaurants added in-house brewing (really high margins!) and evolved into brewhouses.   BJ’s is part of a group of craft-beer themed restaurants from that era which includes Rock Bottom Brewing, John Harvard, and Heartland Brewery.   They are easily identified by the kitschy beer logos that they all use and their strange affinity for red and brown ale.

Yes, I know BJ's has one countless beer awards, but they all have.  There must be 300 beer contests with 20 medals awarded at each one.  Coors Light has medals too.


This logo is a winner: